DVD on sale on the night 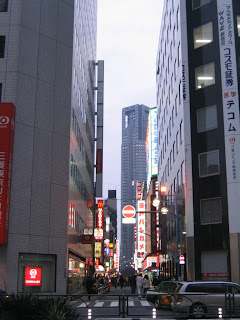 walking back to our hotel (which looked down on the government building in the centre of the picture. well, it felt like it from the 32nd floor- tokyo is a vertical city) 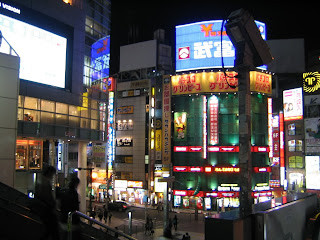 shinjuku, viewed from one of the train station's east exits (maybe. japan's stations have a weird internal logic). just to the left of the stairs is where everyone smokes (no wandering round puffing away here). of an evening bands set up and play to the passing masses. 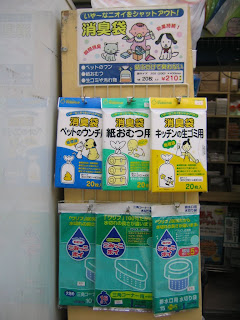 every consumer object has a cartoon to to assist sales. 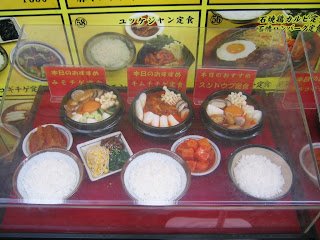 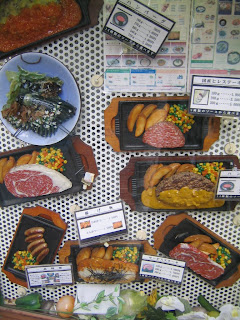 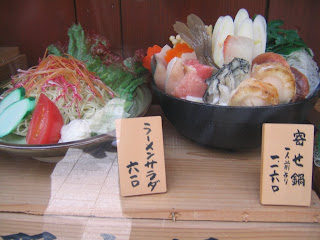 as per mentioned a while ago, tokyo has the most insane reggae record shops imaginable (friendly too- i was given an ujama 7" for free at jammers after having a nice chat with the owner, double h). £50 for rare original press 7"s a norm, if you're that way inclined (i'm not). 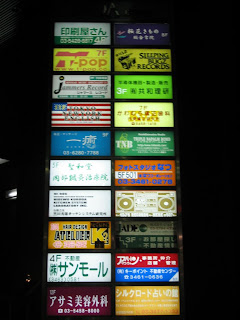 i paid about £3.00 per 7" purchased, as i wasn't digging that hard. you'd need to spend a serious amount of time to appreciate the goodies on offer, and i "had not come all this way to spend the entire holiday in record shops" to negatively paraphrase-for effect- christine's thoughts on the matter (in fact she happily gave me an afternoon to search out vinyl delights, in addition to smiling and only slightly rolling her eyes when we happened upon places like gloria's records by chance).

and my suitcase was already full of tat. 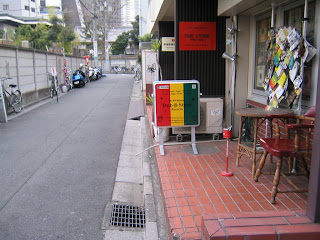 in addition i got a couple of nice mix cds- a '70s reggae classics' style one which avoids most of the usual hits, bought from a shop in kyoto that was banging out bashment, full of 'bloodclaat' 'bun batty man' lyrics, of which the mass of people walking past were thankfully ignorant. this appeared to be a bit of an issue amongst the japanese reggae fans- appropriating words without understanding (or at least, not fully appreciating) what they meant.

this was highlighted on the second cd (pack)- a recording of a '45 clashment session', featuring the aforementioned double h (wicked selection) and japanses chums who ruined their selection- generally late 80s/ early 90s ragga- with lots of excessive shouting. the way they dropped from japanese into patois throughout is a somewhat dislocating experience.

possibly more trite tourist type posts as (or, if) i collect my thoughts. for example. i bought a toothbrush called a 'clinica lion'. oh how we laughed. 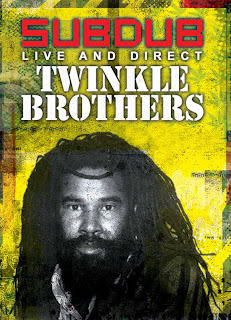 The taxi driver into town was playing a garage compilation cd, skipping songs every 30 seconds, enjoying the ride and chatting away in a Bradford accent that Paul found somewhat difficult to understand. I however have integrated fully.

No queue to get in at 11.00pm (I'm getting obsessed). Hopefully this means fewer pill poppers tonight as live acts seem to repel the raver contingent and attract the dread. The main room was set up with stacks either side of the stage and one at the other end of the hall, which meant that the Twinkle Brothers were going to play through Iration's system- a blessing, as we later found out.

We popped into the backroom where Sizzla and Dizzee Rascal vocals were being thrown over heavy dubstep. Stayed longer than we meant, because a) it sounded good- vex'd could well have been playing as it turned very evil-and b) I queued for beers for about 1/2 an hour. I also found out that cans in the back room were 30p more than in the main room about 5 metres away. dubstep tax. cheaper for the righteous.

Makes up for walking right in when we arrived. Suitably refreshed we searched out the Twinkles.

The band were already playing on stage- tight and heavy, sound system rather than 'live' sound- but no Norman Grant. First song finished and on he bounds- nice cape. 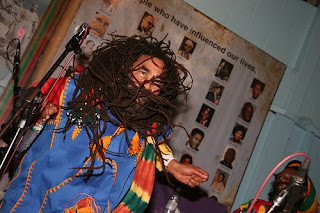 For the next couple of hours he and the band put on a amazing show- professional, tight with the full range of pull ups, stop-starts, extended outros etc with the occasional bit of live dubbing, as song went into extended version. the whole place was jumping. 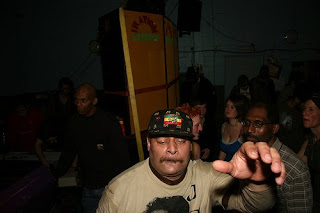 Now, I'm not a Twinkle Brothers afficionado by any means (I own a best of and have the Shaka related stuff on tape somewhere), and as was pointed out, they have been going 'since 1962' in one form or another- indeed Norman even recounted the same story below word for word:

So how much was off the cuff and how much a run through of the same old same old, i don't know. but tunes like 'One Head', 'Rasta Pon Top' and 'Get Behind Me Satan' got the feet moving and the train spotter gene was truly supressed for the duration.* 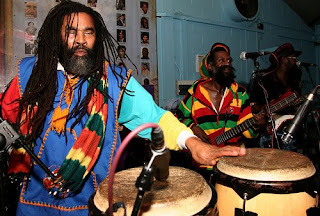 They encored and then it was time for Iration again, starting with the Cool Ruler's 'Rumours' going into version and dub (featuring a live rendition of Welton Irie's 'Army Life' lyrics), the Barrington Levy and Cultural Roots tunes that Revolutionary Sounds (re)released last year (listen to my last mix to hear them) and a redo of 'Lot Of Signs', which I've heard at all the last few Iration dances. Then some Twinkle Brothers dubplates (upcoming on Sip A Cup) before year 3000 bizness. A guy who'd been leaning on the barriers by the control tower touches the mike- the sweetest voice! Mark and crew grin like cheshire cats. A Rasta does stretches and lunges, warming up for the ensuing steppers session. Cameras flash. Smiles all round again. All night.

Clock said 4.00am, so we reluctantly headed off in order to get (an unbelievably clueless) taxi, ears well and truly ringing.

get a sense of the mass of material they've created here

*do a search on youtube to find plenty of live clips

this slayed the place last night:

(distorted, not filmed last night, nor filmed by me)

alongside a fresh dub version, not yet 24 hours old.

as did a special of dubateers' 'hooligan dub'. you can hear a version with most of the bass stripped out- (nice jts amp!) here

It was pissing down when we arrived at the W.I. centre, but thankfully we didn’t have to queue, which made a nice change. After scoring a couple of Red Stripe, we entered the main room just as Youngsta came to the decks. He played a pretty nice set, with far fewer gallopy bangers compared to when I saw him in April and as usual his mixing was out the top drawer, which went some way to make up for the focus on the drop in his selection. Highlight was Mark Iration chanting away before wandering off into the dance, (wireless) mic in hand, adding occasional ‘vibes’.

Skream then ratcheted up the energy levels a bag of new dubplates which pushed a considerable amount of air before we went off to the back room to catch Mungo’s Hi Fi.

Playing off a laptop with some external mixer and effects, Mungo’s sounded exceedingly quiet in comparison to the roar of the iration system (maybe next time...). However, they have created a nice niche in reggae at present, mixing 80s digital with UK-Dub and (to a lesser extent) Dubstep in their own productions whilst juggling ‘inna soundclash style.

They even had a Horace Andy dubplate on a ‘Skylarking’ refit, bigging up Mungo’s and finding time to fit in a mention of Subdub. A bit excessive for a backroom maybe- particularly as at times people would make a mass breakout for a smoke which didn’t help the vibes- but it was the best tune of the night, although Kenny Knots' 'Rasta Meditation' (and ensuing versions), a unity sounds re-rub and a supercat sampling dubsteppy number ran it close.

MCs Ishu and Kwasi Asante worked in combination and looked and sounded like they were having a right laugh- at one point getting excited and chanting ‘we run in the red’, because, er that’s what Mungo's were doing.

Back in the main room for Digital Mystikz and Mala was 'going deep'. The influence of reggae in his new tunes is obvious, but it didn’t sound clichéd or a rip off and it was some of the best Dubstep I’ve heard this year. Coki played some wobblers, but in comparison, they’re becoming a creative dead end- candy to the [insert some suitably nourishing foodstuff here] we’d been listening to previously. However, the crowd (male, hooded patterned sweatshirt, baseball cap for 75% of those attending) lapped up the growling, speedy basslines. It reminded me of modern D’n’B, which doesn’t bode well for at least one potential Dubstep future.

With Kode9 not on until 3.30am and a strange encounter with a drugged-up fuckwit tipping the scales towards ‘let’s bail’, we left. The rain had stopped.


EDIT NO .2: Footage of lights on at end of the night: 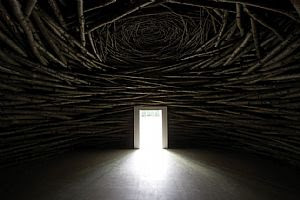 well, we finally managed to steel ourselves and cross the M62 into the wilds of wakefield to visit the yorkshire sculpture park for the first time this year, in order to see andy goldsworthy's exhibition which marks the park's 30th anniversary.


now, mr goldsworthy has often seemed to be a little too 'coffee table' for my tastes, but that says more about me and my crass assumptions than it does the actual work, which was both thoughtful and thought provoking. as well as smelly.


having left city living behind about 4 years ago, the role of man in the creation of the rural space and the often fleeting beauty to be found as weather conditions change, becomes apparent on a day-to-day basis. goldsworthy understands this deeply.


i won't get all art crit. on you- there's plenty of stuff on the net if you wish to investigate further (and no doubt his work is already well known to you), but i can't recommend this show enough- particularly as there is a nice retrospective in the smaller galleries, which highlights what a nutter he is. 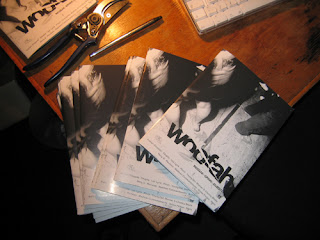 as you will be well aware, mssrs eden and meme have delivered into the world woofah mag, the cover of which alone is worth any financial outlay.

amongst all the fine writing and visual feasting, you will find that i have contributed an interview with mark iration (whose generosity with time and information, as well as continued interest in the project deserves to be hailed from the hill tops).

tribe records will have copies by early next week.